While speaking to two of my twitter friends; Ruwi & Drishti the other day, i came up with this idea…Hope you all like it. 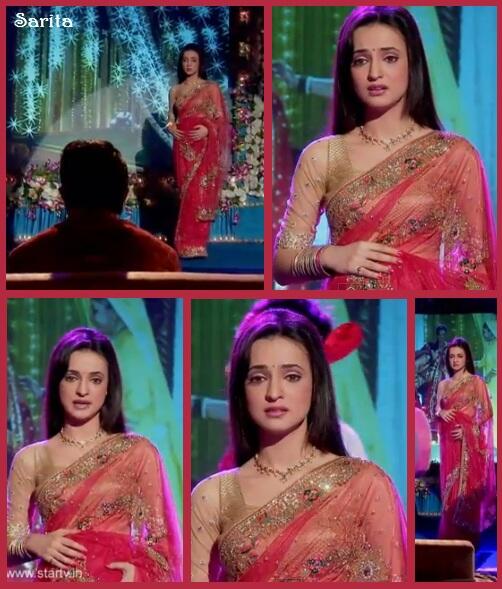 {Author’s note: In this shot, Anjali and Shyam are married and she is still pregnant. Shyam was always a nice guy, so they didn’t have any big reveal about anything. The play’ was done but to recreate the beautiful moments in Shyam and Anjali’s life.}

Arnav looked on at his cousin NK and his wife enacting the love story of his jijaji and his di. He couldn’t help but bring a small smile to his face during their act. During the last part, Khushi came out on stage and Arnav’s jaw dropped. Khushi was pretending to be his sister but he never expected her to come out on stage sporting a baby bump.

Everyone couldn’t help but smiled when they saw her. She looked like a pari. Arnav was always okay with kids and liked them but the thought of having his own never exactly crossed his mind. But right now, after seeing Khushi’s pregnant belly, he felt a sense ofneed, he wanted kids.

After the play was over, Anjali and Shyam cut their anniversary cake. Everyone partied for a while and then retreated to their rooms, calling it a night.

Arnav walked into the room and saw Khushi emerge out of the bathroom in her night suit. He pulled her towards him and she collided with his chest.

She smiled and he continued, “Especially in that baby bump.”

A red hue appeared on Khushi’s cheeks and Arnav smirked.

He caressed her flat stomach and said, “I wish you never took the bump out.”She looked at him and asked, “Arnavji?”

He interrupted her, “Where is the baby bump?”

She looked down at her stomach, “Huh?”

He whispered into her ear, “Where did you put the bump you used for the play?”

She answered, “In the cupboard… why?”

He left her hands and strode to the cupboard. He fished out the bump and made his way back to her. Khushi’s eyebrows frowned in confusion as to what her husband was about to do. He put the bump on the bed and raised her shalwar top, exposing her stomach. She remained quiet as Arnav took the bump and placed it around her waist. He turned her around and fastened the string around her back.

He pulled her shalwar down and there it was; her swollen bump. He turned her towards the mirror and stood behind her with his arms encircled around her stomach and his chin resting on her shoulder.

Khushi looked into the mirror at their reflections.  She liked this feeling of being pregnant, standing with the man who she was madly in love with. She felt content with the realisation of how it would feel to be pregnant with her Arnavji’s child, the symbol of their love. She leaned against him and put her hands around his which rested on her stomach.

He released his hands from beneath hers and bent down on his knees. He hugged her waist and pressed a kiss against the bump.

Looking up at her, he said, “I love you… I love you a lot Khushi. I can’t wait to start a family with you. I never really thought about becoming a parent, but I want this, and I want it with you. I want to experience this with you. “

With tears threatening to spill over she pulled him into a standing position and kissed both of his cheeks.  She cupped his face and said, “Me too Arnavji, I want to experience this with you.”

She encircled her arms around Arnav, with the intention of hugging him tight, but the bump got in the way. She looked down at the bump and pouted. She started raising her shalwar top to remove the bump, when Arnav held her hand firmly.

He shook his head and caressed the bump, “No Khushi, don’t take it off, we’ll have to get used to a little one being there. “

Khushi hid her face in his chest and they hugged each other as closely as the bump allowed them too. He picked her up and placed her on the bed. Whispering into her ear he said, “Let’s make this bump real now.”

He pecked her lips and she hugged him. Whispering against his chest she said, “Let’s have our baby Arnavji.” After Arnav heard that, he made sure that he and Khushi made the ‘fake bump’ real that night.